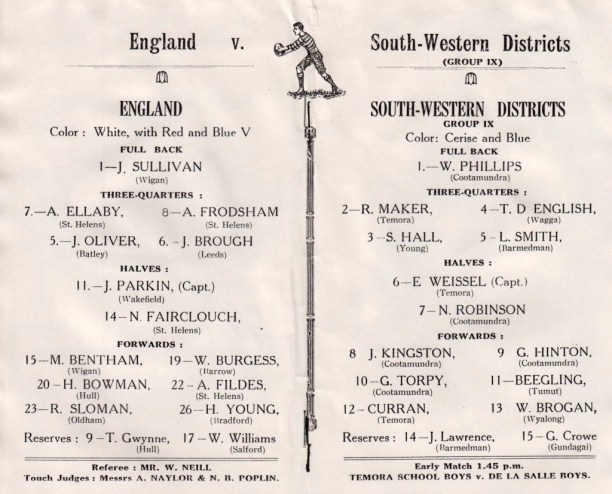 Bill Flanagan of Cootamundra replaced Tom O’Farrell as president at the Group 9 AGM. The focus was on the Group taking a bigger role in the management of challenge cups and particularly in settling the growing number of disputes.  As the game was becoming semi-professional and the economic benefits to local businesses of a successful cup run substantial, so was the importance of winning, by hook or by crook.

A widespread matter of concern was Cootamundra’s rewriting of the Maher Cup rules when they won the cup outright at the end of 1923. In particular the 10 mile residency limit.  Gundagai were aggrieved that Gerry Crowe of Gobarralong was excluded from their team due to his farm’s distance from the town, although there was clearly no town closer. So this season a process to grant such players a special permit was implemented.  However the distance clause would still cause serious friction later in the year and beyond.  As well Cootamundra reserved the right to play the first and last challenges in any year where they had lost the Cup; were in charge of settling Cup disputes – even when they were an involved party; and were generally felt to dominate the affairs of Group 9 with the president, secretary and treasurer all being drawn from that town.

The ultra competitive nature of Group 9 was reflected in a still growing expenditure on captain-coaches.  Cootamundra recruited Norm ‘Latchem’ Robinson from Balmain at £12, Gundagai still had ‘Chook’ Fraser and Temora Eric Weissel, Bill Brogan coached Wyalong, Keith Ellis from Newtown made £8 per week plus wages from a railway job at Junee, Young had Reg McEnroe of Newtown for £7 plus board, Harry Caples from Easts made Wagga competitive for £19 a week, and Tumut engaged international ‘Snowy’ Marsh for a bargain at £7.

The format of Country Week was changed so that each district played a Sydney side.  Southern met Eastern Suburbs and were beaten 20-12. However a Group 9 selection returned in July to again play the Sydney competition leaders and won 23-19.  The Country team beat the City 35-24. Three Group 9 players: Weissel, Kingston and Gundagai’s ‘Bluey’ Freestone were selected to play for Australia. 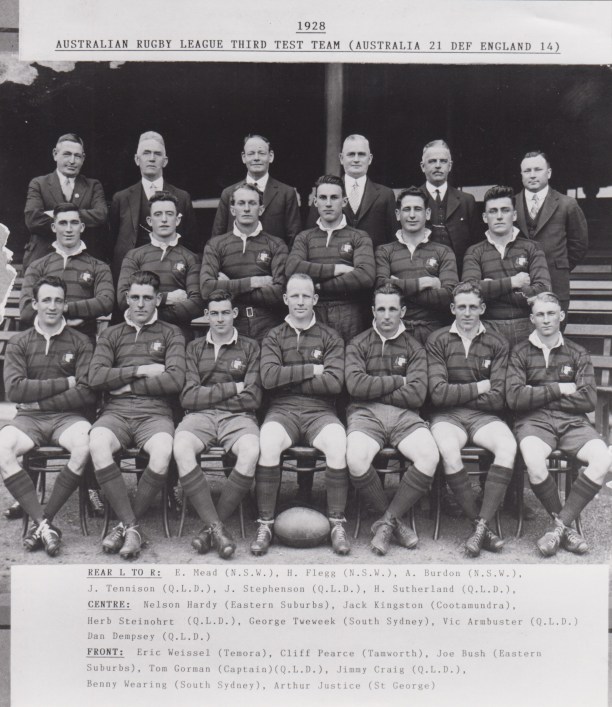 The Australian team that defeated England with Cootamundra locals Eric Weissel and Jack Kingston, plus the Grahamstown lad who wandered off to South Sydney – George Treweek/e

Temora took up the idea earlier championed by Fred Cahill of Young, to run a points table style competition among Group 9 teams.  It was again deferred.

The Maher Cup draw was always a matter of chance and in 1928 three top Group 9 teams, Temora, Young and Tumut were unsuccessful in getting a challenge slot, while Cowra, Grenfell and Canowindra from Group 11 did, the latter trouncing Cootamundra – only to be thwarted by the dubious application of the ’10 mile rule’.   The hypocracy was apparent to everyone.  While a paid player who would only remain in Cootamundra for the football season was considered a resident, a hard-working farmer struggling on a soldier-settlement block 11 miles from the nearest town was not.

The call was to limit the Maher Cup to only Group 9 teams rather than ‘any side based within 100 miles of Cootamundra’.