With visits to Balmain and from England on the drawing boards Group 9 got energized early.  The AGM, held in the first week of March finishing up as the sun rose. Henry Paton lost the presidency to Cootamundra’s Bill Flanigan, while Fred Cahill defeated Coota’s troublesome referee Tom Alberts for secretary. J. Maloney of Cootamundra was appointed treasurer.  Secretary Harry Glanville stood down miffed that the clubs had their snouts in the trough slurping up last year’s hard-earned surplus.

As the Depression (and Jack Lang) gave renewed impetus to the Riverina’s “new state movement” the seeds of secession were also being sown in sport.  The issues were many, including:

Cowra joined Group 9.  Cootamundra imported five paid players – Teddy Anderton (Wests), Dave Hey (St. George), Ernie Capelin (Lismore), Cec Willard, J. McCue, and got Jack Kingston back from Young.  In preparation for ‘Country Week’ Group 9 destroyed Group 8 by 41-18, but interest in the Sydney matches was waning. In May the Queensland state side came to Cootamundra and defeated a weakened Group 9 selection 18-12.  The gate was £128 of which £100 went to Queensland.  And in July at Temora a testimonial match was held for Eric Weissel.

Temora finally gave up the Maher Cup to Tumut, who opened the season by defeating Cootamundra’s imports before a record Tumut gate.  The boys from the hills then fended off seven more challengers before the railway men from Junee dominated the latter matches.  In the last game of the season Temora regained the Cup it had so reluctantly relinquished.

In July as the English game loomed ‘ultimatums were in the air’ and a Group 9 breakaway seemed very possible.  The triggers included:

Solidarity was not a term used within Group 9. Cracks appeared. Both Junee and Maher Cup holders Tumut backed the Wagga match and decided not to play in competing fixtures.  Cootamundra and Young informed Tumut that it was not their place to make such a decision as Cootamundra controlled the scheduling of Maher Cup matches. Young declared they would be going to Tumut to challenge anyway.

Cootamundra and Cowra planned to hold a Weissel Cup match to clash with the England game.  Group 9 withdrew its affiliation with the NSWRL.  Fred Cahill, now in the powerful position of secretary sent a manifesto to all clubs in the state. Tumut made it star players Norm ‘Latchem’ Robinson, Tom Forbutt and Tom Sloane available to meet the English at Wagga.

To the embarassment of Group 9 the Wagga match attracted a big crowd, some 15,000 according to the Daily Advertiser but this was disputed by the Cootamundra Herald which observed that the gate was smaller than the England match at Cootamundra back in 1928. There certainly wasn’t a united front amongst country clubs (let alone Group 9 clubs), to Fred Cahill’s manifesto.  One country leader was reported in the Sydney Sportsman as saying: ‘Do you think we’re mugs enough to fall in with a crowd that can’t manage its own affairs, yet wants to get everybody into the same mess they’ve got themselves into?

Of course Young claimed the Maher Cup due to Tumut’s ‘forfeit’ and Cootamundra as the Cups’ controllers concurred.  The Referee newspaper predicted the death of the Maher Cup.  But on 31st July at Cootamundra the NSWRL and Group 9 suddenly settled their differences.  The NSWRL agreed to contribute to the gate losses in the Queensland match and support the Country Constitution Conference scheduled for October.  Group 9 agreed to reaffiliate. Most importantly Maher Cup peace prevailed with the trophy remaining at Tumut.

The NSWRL even agreed that Group 9 under Eric Weissel’s captaincy could make a tour of country centres in September.  The matches were all won – at Parkes (gate £57), Glen Innes (gate £140 plus £100 received in rain insurance) and at Scone (a gate £186 and 4,000 crowd).  They finished up in Sydney at the Sports Ground on 1 October, going down to Souths 16-19. 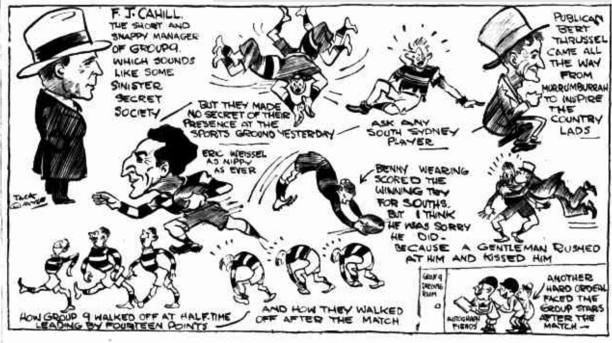 Cartoon from The Truth 1 October 1932

The South-Western Competition established in 1930 continued but with just five teams: Young, Grenfell, Cowra, Boorowa and Harden-Murrumburrah and some forfeits it just hobbling along.  Gate receipts fell away badly.  The Country Conference was held in October but little was reported except squabbling.