The argument was that the few clubs willing to spend big on imported players were the ones that won the Maher Cup and thus got all the matches, while those that couldn’t or were unwilling to spend up, stumbled along with ‘incomplete football programmes‘.  So the cry was for a regular competition throughout Group 9 and either for a reduction of, or end to, imports.

Things came to a head partly because most of the clubs could see that they were moving towards insolvency.  Even usually cashed-up Cootamundra had paid its players £230 in 1932 and only received gate takings of £180.

So in 1933 a real competition, rather than just challenge cups, finally got started.  The paid players were a little fewer in 1933 but as soon as clubs found some funds they spent up.  Trying to buy the Maher Cup continued for another 25 years.

Secretary Fred Cahill drafted the new competition’s rules and structures. Cahill was energetic and effective but not universally loved.  He only scraped in at the AGM as Group 9 secretary, after a tied vote.  Starting mid afternoon and still going heatedly along until after midnight the delegates elected Norman Bland the Temora builder president with Jim Maloney of Cootamundra retaining the treasure’s job…briefly.  Maloney, a bank clerk, was charged with embezzlement four months later.

All Group 9 teams except Wagga agreed to enter the combined Groups 9 & 17 competition, which, to minimise travel, was divided into western and eastern zones.  The east was: Tumut, Gundagai, Cootamundra, Harden, Young, Cowra and Grenfell, the west was: Junee, Temora, Barmedman, West Wyalong, Griffith, Yenda and Leeton.  There would be semi finals and finals in each division and a grand final between the winners of each, for the Gleeson Shield. Harden withdrew before the comp. commenced

‘Bunny’ Poplin of Young captured the anti-NSWRL mood at the AGM when he moved that Group 9 ‘take no action in regard to Country Week games’.  He asserted that ‘the elimination matches, were always a dead loss to the Group, and the Group was heavily in debt, while the head body had backed out of its obligations, to pay the loss on the Group 9 tour last year. The city grabbed the profits from the Country Week games in Sydney, but left the losing part of the show to the Groups. On top. of that the city took all the profits from the inter-State and International matches, using country players, and eventually used that money, or portion of it, to help the city clubs to poach the country players’.

Fred Cahill had written to all the country Groups seeking their support to form a separate Country Rugby League.  The response was mixed, but in July the influential Newcastle Group threw their weight behind Group 9’s initiative and everyone was readying for a big meeting.

Group 9 had by 1933 been widely seen as having the best quality football in country NSW. No longer focused on Country Week eliminations, attention was directed to the challenge by Group 17 for Group 9 ‘s mantle of ‘country champions’ on 15 May.

The following week the eastern and western teams commenced play in the Groups 9 & 17 competition.  It didn’t start well, Grenfell only getting a £13 gate when they hosted Cootamundra and Wyalong went to Temora to find they were playing the reserves, the top players were engaged in the lucrative Jack Hore Gold Cup.  After heated argument the Group 9 clubs agreed  to field their strongest possible teams for the Sunday comp.

West Wyalong and Temora spent most of the season arguing about the Maher Cup – which is a long story and has it’s own blog – go here for more! 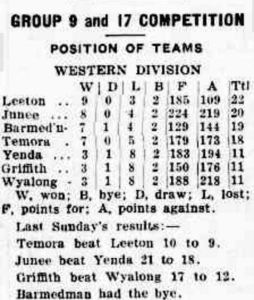 The final table for the Western Division

Money was scarce. Competition gates seemed to average about £20 or 400 spectators. When Tumut, a quite formidable team and passionate Maher Cup chasers, were due to challenge Temora on 2 August for the Maher Cup they withdraw. With two of their good players out it just wasn’t worth the expense to travel.

Short of funds an with no big game scheduled Groups 9 and 17 decided to arrange another match between among themselves in August for what they billed as the ‘country championship‘.  With only six of the Group 9 selections making themselves available Group 17 won convincingly 35-8 over a ‘leaderless legion‘.  The gate was £114.  The next week a combined Groups 9 & 17 team went to Parkes and were drubbed 41-13 by Group 11.  With Eric Weissel out, with perhaps now just too much football, and with few class imports moving west, Group 9 didn’t look like the famous country champions any more.

Leeton clearly had the best town team in 1933.  Cowra went down 23-7 in the final at Temora.  The gate, a modest £41.  There was now distinct concern across the Riverina, amongst Rugby League and Australian Rules clubs, about the marked fall off in revenue.

In November Fred Cahill’s other dream of a Country Rugby  League came into being.  More on that in 1934.