1934 started with a sense of excitement and disarray.  Townfolk crowded into their local football club meetings.  At West Wyalong and Junee the locals were less than satisfied with the performance of Group 9’s officialdom.

The Group 9 AGM in March was an acrimonious shambles, adjourned after six hours of indecision.  Wagga was upset they had been banished to a new Group 18 and everyone was at loggerheads about the state of the finances, where the money had gone and who’s fault it all was.  As usual Fred Cahill was in the thick of it – and perhaps saved his skin by regaling all present for an hour and a half of the benefits of the new Country Rugby League (CRL).

The following week another long meeting at least elected a new president – Alfred Bennett the owner of Junee’s Southern Cross newspaper, and secretary Lindsay Gown an insurance agent of Gundagai. In a slap in the face of an absent Fred Cahill affiliation with the CRL was only approved ‘under protest’ and on the casting vote of the chairman.  The practice of winner take all in Cup matches was at last challenged – with 25% to be allocated to the visiting team.

Cahill left Young and the shambles and got a publicity officer job in Newcastle for up to £750, a salary to make a professional footballer of the time green with envy.  His sparring buddy Harry Glanville of Junee got a better railways position in Sydney.

The elimination matches for Country Week, abandoned in 1933, were reinstated with gusto.  A double header at Junee produced great football under Eric Weissel – Group 9 defeated Group 8 by 18-6, while Group 17 downed the new Group 18 from Australian Rules country 20-2 – but the two only attracted a £45 gate.  Group 9 bounced back to its best at Griffith beating Group 17 by 44 to 8 with £102 taken. 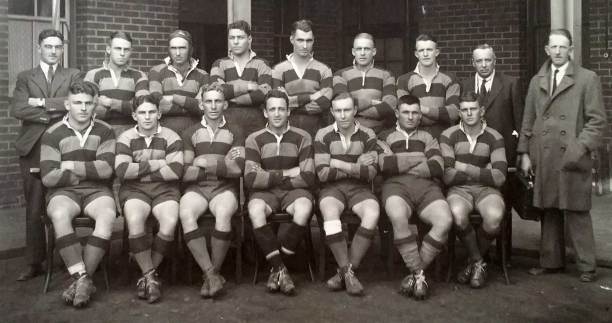 The Gleeson Shield competition kicked of reporting an £18 profit in 1934.  The teams were unchanged, except that Barmedman declared themselves broke and withdrew just prior to the starting date.

It was quite a chaotic year. Cootamundra was on the end of some drastic action from Group 9 when they were banned for the season for playing two unregistered players, C. McManus and T. Russell. West Wyalong were then out of sorts as they were due to host Coota for the Maher Cup and the Mallee Men were salivating over a possible record gate.  The match was cancelled and then the Group 9 executive changed their decision – imposing a fine that Cootamundra would find difficulty in paying, but did. Cowra got into a dispute with Tumut and the cost of travelling and withdrew from Group 9, while Gundagai and Coota decided to play a Gleeson Shield match with reserves, the gate amounted to 30/-.  In June the MIA teams were also grumbling about travel costs and looking at a more local competition in 1935.

Cootamundra also made an interesting protest against the Reverend Dudley Leggett’s participation for Young in  a Maher Cup match.  The Maher Cup was played on Wednesdays.  Leggett was the Anglican minister at Boorowa, so Coota claimed he shouldn’t play for Young. In 1934 Boorowa didn’t field a Rugby League.  Doesn’t matter said Coota, Boorowa is in Group 8 and Young is in Group 9.  He should play with Yass then, the nearest Group 8 club to Boorowa.  However Yass only played on Sunday, which was for Reverend Dudley part of his working week.  Amazingly this one dragged out for many weeks. It brought the Coota practice of deciding on its own protests to a head.

There was also much ado about the Maher Cup draw and numerous unpleasantries. The West Wyalong Advocate provided a neat summary of the season’s convoluted disputations here.  1934 ended in pessimism and disarray One could only hope that the Group 9 might get through another year without open internecine warfare.

Leeton won the Gleeson Shield for the second year, downing Tumut 14-6 in the final.